Well, that round was a bit more like it! The London Classic came to life in round seven at Olympia, with three decisive results, some pulsating play on all the boards and a tense, cliff-hanging endgame which went on long into the evening. After seven of the nine rounds the situation is now as follows: 1 Maxime Vachier-Lagrave 4½, 2-5 Levon Aronian, Magnus Carlsen, Anish Giri, Alexander Grischuk 4, 6-8 Mickey Adams, Fabiano Caruana, Hikaru Nakamura 3½, 9 Vishy Anand 2½, 10 Veselin Topalov 1½.

The first game to finish (in just a little under three hours) was Aronian-Topalov, with the Bulgarian going down to another disappointing defeat. Topalov has hinted at retirement more than once in the past few months, and perhaps, psychologically, he has already retired in his mind and it is having a negative effect on his game. He started the tournament leading the Grand Chess Tour but he can forget any ambition he had of winning the first prize there. The opening was a Symmetrical English, with a weird (but known) line in which the black knight hops around the board in a loop to e6 via d5, b4, d3 and f4. But Topalov’s queen was soon out of play and an injudicious exchange on g5 left him helpless. 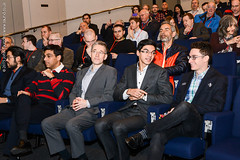 Adams-Grischuk was the next game to finish, after around 3½ hours. It started with a Najdorf Sicilian, and ended in a draw in 29 moves. Around move 20 it threatened to get very interesting but then fizzled out to a repetition not many moves later. 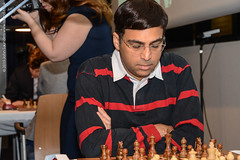 Anand-Vachier-Lagrave was also a Najdorf Sicilian, of a different line to the Adams-Grischuk, though there were similarities, with the c3 knight coming to d5. Fleetingly, White had a chance to get on top in this game but Vishy missed it in the middlegame complications and he quickly succumbed. Thereafter MVL was relentless, first winning material and then rather cheekily setting up a flashy finish. It shouldn’t happen to a chap on his 46th birthday and, judging from the look on his face as he exited the auditorium, it would rather take more than a cake and a few balloons to console the great world champion in what remained of his evening.

Julian Hodgson in the VIP Room became animated when he saw that Caruana-Giri started with his beloved Tromp. The opening would have alarmed players unfamiliar with Tromp strategy as it involved Black giving up a pawn, which became a monster passed pawn on c6. Except that, in reality, it wasn’t too monstrous as it lacked support from its colleagues, and a far-sighted GM would realise that its days were numbered. Again, many Black players might have worried about the white rooks dominating the open files in the middlegame but Giri seemed to have everything under control. Soon all the major pieces disappeared from the board, as did all the queenside pawns, and a drawn position reached.

By contrast with Caruana-Giri’s Tromp, the Exchange Slav of Carlsen-Nakamura elicited a few groans from the watching spectators. The Exchange Slav is right up there with the Berlin Wall when it comes to turgid openings. However, any snap judgements on what sort of game we were about to see proved to be very, very wrong. This was to be Carlsen at his majestic best, against his favourite whipping boy. The world champion is a veritable chess alchemist, capable of turning base metal into gold. That said, just before the end of the lengthy torture session, there was a golden opportunity for Nakamura to save himself.

A remarkable game, albeit with a few blemishes. The game finished around 11pm. With two rounds to go, it will no doubt have boosted Magnus Carlsen’s morale and make him a tough opponent for anyone in the final two rounds at the weekend. But the tournament and Grand Chess Tour leader is Maxime Vachier-Lagrave and he is going to be hard to stop in his current form.

The nine-round FIDE Open concluded on Friday with an emphatic victory for Dutch GM Benjamin Bok, who won his final game with Black against the formidable US grandmaster Alex Lenderman.

Bok had started the event as the eighth highest rated player. He conceded draws only to Evgeny Postny in round five, and, remarkably, 2127-rated Stephen Moran of Ireland in the first round. Perhaps the turning point in Bok’s tournament was his somewhat fortuitous win against Keith Arkell in round six: