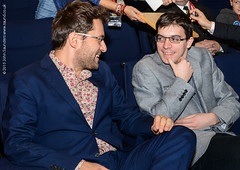 Round eight and we were back to the standard 1:4 ratio of decisive games to draws. But very good quality draws, let it be said. The one winner was Anish Giri, who inflicted a second successive defeat on the unlucky Hikaru Nakamura. Scores with one round to go are: 1-2 Anish Giri (NED), Maxime Vachier-Lagrave (FRA) 5/8, 3-5 Levon Aronian (ARM), Magnus Carlsen (NOR), Alexander Grischuk (RUS) 4½, 6-7 Mickey Adams (ENG), Fabiano Caruana (USA) 4, 8 Hikaru Nakamura (USA) 3½, 9 Vishy Anand (IND) 3, 10 Veselin Topalov (BUL) 2. As regards the Grand Chess Tour standings: the estimates going into the final round are Giri 24, Vachier-Lagrave 23, Aronian 22, Carlsen 21, etc. These can of course change quite drastically depending on results.

There was quite a light-hearted mood amongst the younger players today as they assembled for Round eight of the Classic in the front row of the stalls and waited to be summoned by the tournament director to their seats on the stage. Magnus Carlsen, who had been six minutes late for his round seven game against Nakamura, and a bit grumpy generally, seemed a different person. He entered into the spirit of Levon Aronian’s banter with Maxime Vachier-Lagrave and was clearly amused at what Levon was saying to Maxime. Which I overheard… “I was really impressed by your Bg5, Bf4 idea yesterday – what impressed me was how awful it was!” Yes, you heard it here first, the super-GMs like to tease each other before games. There was another grandmaster wind-up after one of the games in the commentary room. Telling the audience of the opening phase of his game with Grischuk, Levon Aronian said that “it was a line we both analysed.” Grischuk, with mock incredulity: “you analysed it?” and a few moments later, “well, it wasn’t the best analysis of yours.” Said, and greeted, with a smile.

Levon and Anish seem to be the principal teases amongst this particular batch of superstars, as you can probably guess from their cheeky comments at commentary sessions, but the other players take this good-natured razzing in good part. It helps to dissipate the tension of the moment. It is reminiscent of the chat between footballers of opposing teams waiting in the tunnel before they take the field. Topalov looks less than amused at the moment, though he too has a lovely, dry sense of humour when he’s in the mood, but it’s easy to understand that he’s probably just longing to be on a plane out of London right now. 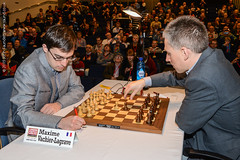 Tournament leader MVL opened with a Ruy Lopez, to which Mickey Adams responded with the Breyer. You thought I was going to write another name beginning with “B” there, didn’t you? But we didn’t have any of those in this round. This was a typically cagey Spanish, all theory to move 23, and thereafter focusing on a small area of activity on the queenside. A couple of pawns and a knight were exchanged before the players opted for a repetition and adjourned to the commentary room, where the commentators pressed them into service to talk about the other games. 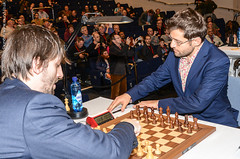 Grischuk-Aronian was a pleasing fight which ebbed and flowed and ended with some more banter and joshing in the commentary room, as we’ve already seen. 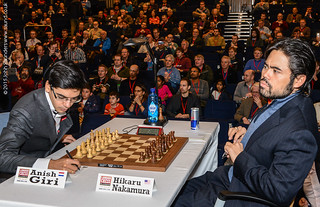 Anish Giri moved up to share the lead with Vachier-Lagrave by defeating a disconsolate Nakamura. The game started with what looked like a King’s Indian Attack but Giri has given it a new twist, modelling it on a sedate line of the Grünfeld which he had reversed for use by White. It’s hardly the most aggressive opening line but it seemed to catch Nakamura in what cricket commentator Geoffrey Boycott calls “the corridor of uncertainty”. Having been ground down in a long game by the world champion the evening before, he may not have been at his best today. Even so he had a reasonably good game before he simplified unnecessarily and allowed Giri’s light-squared bishop to pitch camp in the heart of his position. Time trouble did not help either. 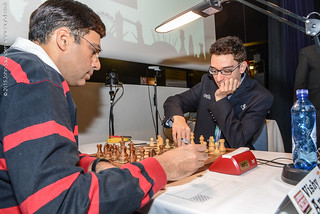 The remaining games featured long endgames which went in favour of the two defenders. Caruana emerged from the middlegame with a slight positional advantage but Anand found quite an intriguing way to liquidate down to an endgame, going a pawn down, but presumably with sufficient endgame knowledge and self-confidence to play it through to a draw. Definitely not one to try at home until you’ve become a GM, or, better still, won the first of your five world titles. Vishy made it all look routine, though he made out it was all a bit of an accident. Worth playing through the download and figuring it out for yourself.

Finally, Topalov-Carlsen: given the world champion’s morale-boosting win of the previous day, and Topalov’s generally dismal showing, it was expected that Black would be making the running here. That proved to be the case. The game began with a Semi-Tarrasch, main line, finally exiting the known universe on move 16. Topalov was fine until move 21 and then a series of lacklustre moves, including a few exchanges, left him with slightly the worse of an ending with queen, rook, knight and four pawns each. The sort of thing which a player of Topalov’s calibre would draw in his sleep… except against the relentless Carlsen. The queens came off and still the Norwegian pressed. On move 38 a pair of pawns were exchanged, and at this point Carlsen dug in for the long haul, gradually tightening his grip on the Topalov position, with his trumps being his better-placed king and his opponent’s vulnerable e5 pawn. It took him a lot of patient manoeuvring but finally Carlsen established his knight on f4, and used this as a bridgehead to improve his position incrementally. Finally, on move 97, Carlsen had to concede the draw.

Carlsen was quite good-humoured about it but nevertheless felt that the strictures of the 50-move rule were “ridiculous” in circumstances where he had been making legitimate efforts to win, and arguably achieving his objective, bit by bit. However much one sympathises with his argument, rules are rules, and they have to be accepted. As indeed he did, with good grace. Topalov, meanwhile, had been oblivious to Carlsen’s 50-move problem. “Couldn’t you have bluffed him?” was commentator Chris Ward’s mischievous suggestion. Carlsen just smiled: “maybe!”