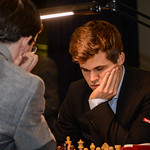 To adapt Gary Lineker’s famous football quote (and not for the first time): chess is a simple game. The players play longplay, rapidplay and blitz and in the end Magnus Carlsen wins. The final day of the London Classic had the lot – a mind-numbing, eight-hour extravaganza of chess in three different formats, brilliant moves, crazy strategies, outrageous slices of luck – and somehow you just knew that Magnus Carlsen would come through it all to snatch first place in the tournament and in the inaugural Grand Chess Tour. He did so and deserves the plaudits.

But let’s also hear it for his co-stars in the last-day drama – Alexander Grischuk, Anish Giri and Maxime Vachier-Lagrave – who deserve to share some of the winner’s stardust. 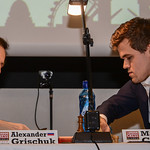 Most pundits expected Carlsen-Grischuk to be the game of the round, given that the world champion needed to win to have any chance of winning the tournament and the Grand Chess Tour. The players did not disappoint and it proved to be the only decisive result of the last round. This was a gripping encounter, if not necessarily a well-played one. Sometimes, when he’s gung-ho for a result, Carlsen can vary his style from the relentless Capablanca/Karpov model, to something resembling Tal at his mercurial best, following slightly crazy plans and beguiling opponents into errors they wouldn’t usually make against anyone else. And Carlsen playing in the last round of a London Classic tournament, as we know from past occasions, is in his element.

Carlsen didn’t have the best of luck in the earlier legs of the Grand Chess Tour but Caïssa smiled on him today. He played a suitably imbalanced opening to ensure there were no easy routes to a draw and soon established a comfortable edge. It looked as if he would smooth his way to victory but he then embarked on a crazy plan to snatch a queenside pawn, whilst leaving his kingside wide open to invasion by Grischuk’s forces. Commentators were incredulous as he compounded his error by misdirecting another of his pieces away from the key sector of the battlefield. It suddenly looked odds-on for Grischuk to draw at the very least, if not win. Carlsen was a very lucky boy, however: Grischuk failed to find what seemed a fairly obvious plan to draw, blundered and was gone. So Carlsen won to tie for first and go into a three-way play-off with Maxime Vachier-Lagrave and Anish Giri. 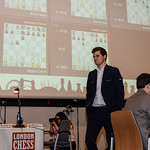 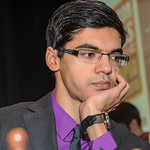 “I’ve created a monster!” Not a quote from the fictional Doctor Frankenstein, but Alexander Grischuk’s rueful comment on the negative part he played in securing Magnus Carlsen’s passage to the play-offs. Negative from the point of view of Messrs. Giri and Vachier-Lagrave, anyway. They were probably gearing up for their two-game rapid play-off when they discovered that a 2834-rated cuckoo had just dropped into their nest. To add insult to injury, they found they were now playing off, not for tournament and tour victory, but for the right to compete in a further play-off with Carlsen. How so? By beating Grischuk, Carlsen had not only tied with his two rivals but bettered their tie-break score by virtue of his last-round victim having a higher finishing score than those of his rivals – a cruel twist of fate. It meant that, within an hour of the end of the last round nine game (which ended about 3 hours 45 minutes into the session), MVL and Giri would be back at the board for two 25m+5s games (and possibly an Armageddon decider) whilst Carlsen had at least two hours to have some dinner and chill out. His second big slice of luck on the day.

I don’t know how irrational or superstitious Giri and Vachier-Lagrave can be but they could be forgiven for sensing that Caïssa wasn’t playing ball with them. Let’s face it, this rule whereby one player can sit out the first two hours plus of a play-off is very unfair. My personal view is that they should play a three-way round-robin at a blitz time limit, just to get the damned thing over with. Four hours plus seems exorbitant (especially when compared with the five or ten minutes of a football penalty shoot-out) and provides yet another example of chess being too slow. However, it has to be said that the play-offs, long as they were, did provide the spectators with a wonderful spectacle by way of an encore. 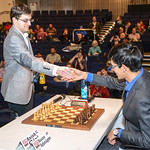 For Anish Giri the equation was relatively simple (even if the task wasn’t): he needed to beat his two rivals to win the tournament and the tour. For Vachier-Lagrave it was more complex. He needed to beat Giri and then Carlsen to win the tournament. But (and a very big ‘but’)… that wouldn’t give him tour victory but put him into a tie for the Grand Chess Tour with Carlsen. So they would have to play off a second time! That didn’t happen as things turned out, but had it happened, the players would have to have played their second play-off on the Monday. Phew! These rules are so complicated that they probably need looking at again for subsequent years, not least for the fact that players can have no clear idea of their desired result when they sit down at the board.

The semi-final would have brought joy to Hungarian GM Andras Adorjan’s heart. Black was more than OK, winning three straight games. Game One was a London Wall (OK, Berlin Wall, then, for those unfamiliar with my previous reports) but, of course, the joy of rapidplay chess is that draws aren’t quite so inevitable, given the part that the clock and time-induced errors play in proceedings, even when quite arid positions arise. Vachier-Lagrave’s 15.Ned4 was a new move but perhaps not an improvement as Giri established a positional grip and then won a central e-pawn. Giri also enjoyed a substantial time advantage. It was actually a beautifully played positional game by Black, causing one to wonder momentarily if the top players of today really need the luxury of slowplay time limits to weave their magic. It is well worth seeking out the download of this game to play through – check it out at the website. 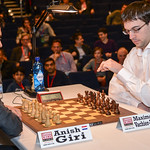 Game two built up to a crescendo, with Giri playing carefully to keep the draw in hand but Vachier-Lagrave eventually securing a lasting initiative which secured him the win he needed to force an Armageddon. But there were plenty of mistakes along the way as the time, and the players’ energies, started to dwindle. As so often with rapidplay chess, and in contrast to the first game of the semi-final, the moves don’t look too pretty on the page but they are incredibly exciting for the live audience. Here’s the denouement, with the result in doubt until the very end when Giri, after 28 games unbeaten in the Grand Chess Tour, misses a crude tactic.

So, to Armageddon: White with 6 minutes to Black’s 5 minutes, with an increment of 3 seconds from move 61. Firstly, the all-important coin toss, which MVL won. He chose Black as expected; most GMs think that the Armageddon system favours Black. However, Giri’s opening choice, a double fianchetto, wasn’t the most dynamic and he never looked too likely to draw the game, let alone win it. Soon MVL was all over him like a cheap suit and the game was over. Giri, unbeaten throughout the tour, had finally lost two games in the space of half an hour.

After the semi-final MVL had half an hour to compose himself for the final rapidplay play-off with Carlsen, who no doubt benefited from the two-hour break. Carlsen ran short of time striving to gain an advantage from the opening, but Vachier-Lagrave defused his threats and it came down to a completely drawn rook and pawn ending. Except for the fact that, with time running low, and the enormous strain of the situation, there is no such thing as a completely drawn rook and pawn ending… 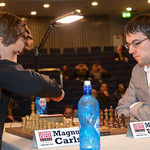 In the second game, Maxime never really made any impression on Magnus. Once Black had found an ingenious sequence of moves to exchange material off, he had to go out on a limb, sacrificing a rook for a piece and pawn to try and generate something but it never looked like working. Draw agreed, so Carlsen had taken the tournament and the tour. Congratulations to him, and heartfelt commiserations to the gallant runner-up.

THE OTHER ROUND NINE GAMES

Let’s just round up the other four Round nine games. Anand-Giri was not expected to be one of the more exciting games of the round. The odds on a draw increased exponentially when the two players started building a London Wall. Anand was repeating a game he played as Black against Carlsen in their 2014 World Championship match, and which was drawn in 122 moves after Carlsen tried and failed to win a R+N v R endgame. Giri varied with 26…b6 but the game soon petered out to the inevitable draw.

Adams-Caruana was the clash of the two draw-meisters, as the tournament director somewhat tactlessly described them when welcoming them on stage for the final game. But accurately, as it turned out. This was an orthodox Ruy Lopez, which diverged from theory on move 13. Mickey had to surrender a pawn temporarily but he soon won it back. Before long an opposite bishop endgame ensued and the two players agreed a draw. Have two players drawn all their games in the same tournament before? Probably, and even if they haven’t, it’s not a stat to set the pulse racing.

Nakamura-Topalov: given their tournament situation, this one was hard to predict. Would the players be trying to win a game as consolation for an unhappy tournament, or would they be content to draw and try to forget the pain? It felt more like the latter, especially when we saw them opt for the London Wall. One for connoisseurs of that system only.

Aronian and Vachier-Lagrave had lots to play for so we expected a full-blooded encounter on this board. This was not the case: instead there ensued a line of the English which had appeared in the games of both players during the past year until Blacked varied with 7…dxc6 and allowed a queen exchange. The position reached, with Black having doubled c-pawns and White enjoying a pawn majority on the kingside, looked ominously like the aforementioned London Wall. After a number of exchanges it came down to a fairly sedate rook ending which was drawn well within the first time control. 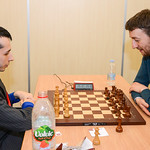 The weekend also featured a very strong rapidplay event, featuring a galaxy of grandmasters amongst the 300+ players, over ten rounds. The favourites were Matthew Sadler (with a startling rapidplay rating of 2800, based on a conversion from his national rapidplay rating), former FIDE champion Rustam Kasimdzhanov, David Howell, Alex Lenderman, Eric Hansen, Jonathan Hawkins, Hrant Melkumyan, Christian Bauer, Mark Hebden and Nick Pert, all weighing in at 2657 or more at rapid. Surprisingly ranked a little lower than the above was Luke McShane, 12th highest rated on 2650. Luke proceeded to demonstrate that the rating list is not such a reliable indicator as he reeled off a Fischer-esque nine wins out of nine to secure the £2,500 winner’s cheque with a round to spare. A draw in the final round against Alex Lenderman put hims a point clear of the field. 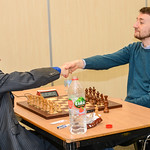 I think that’s all I’ve got room for. Hope you’ve all enjoyed the reports, which I have enjoyed writing. Good health to everyone for the festive season and the new year, and I look forward to reporting on the tournament again in 2016.