The seventh London Chess Classic – bigger and even stronger than its six predecessors – got under way on Friday 4 December 2015 with some tense chess, and just the one decisive result, as Anish Giri of the Netherlands recovered from a dubious position to defeat Veselin Topalov and snatch an early lead.John Saunders reports: It is hard to believe that the Classic has only been around for six years as it is now established as the finale of the year’s elite chess tournament circuit. And it’s as much about beginnings as ends: in its first incarnation in 2009, Magnus Carlsen exploited the opportunity to move to the top of the rating list for the first time. He clearly likes playing in London as he has won three of the four London Classics in which he has competed, as well as winning the London Candidates in 2013 on his way to wrestling the world championship from Vishy Anand. It’s great to have him back in 2015. 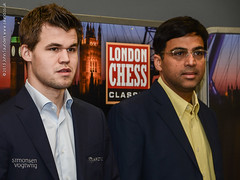 You’ll be aware that the format of the London Classic rarely stays the same from one year to the next. We like to ring the changes almost as often as Big Ben chimes. So this year, as an innovation, we’re only awarding one point for a win and a mere half-point for a draw. What’s that you say? That’s how you score tournaments in your own countries? OK, fair enough, so it’s not really an innovation, then. For once we are falling into line with the rest of the world (but don’t expect us to start driving on the right any time soon). The point, of course, is that we are no longer alone: the Classic now forms an integral part of the Grand Chess Tour, with the Norway Chess tournament in Stavanger, played last June, and the Sinquefield Cup in Saint Louis, played in September, and the players bring their scores from those events to be totted up to decide who wins the overall tour prizes.

The London Classic has the honour to be the final leg of the tour and there are still several players in with a chance of taking the $75,000 Grand Chess Tour first prize. At the start of the London leg, the ‘leader in the clubhouse’ (as they say in golf) is Veselin Topalov of Bulgaria with 17 Grand Tour points, ahead of Hikaru Nakamura 16, Levon Aronian 15, Magnus Carlsen 14, Anish Giri 13, Vishy Anand 12, Maxime Vachier-Lagrave 12, etc. With 13 points Grand Tour still available for the player who finishes an outright first in London, you can probably see that all is still to play for, at least for the top six or seven players in the current table.

Round one was a typically tense and cagey affair. After two hours’ play, the Stockfish computer supplied with the snazzy live board displays on the website showed that every board was as close to even as it gets: pretty well +0.00 on every board. We have to bear in mind two things: one, this is the first London Classic of nine rounds, so players are going to have to conserve their energy, and, two, the sheer strength in depth of the line-up. I tried to average the ratings of the ten players but I got a nose-bleed just doing the arithmetic: I’m not good with heights. I think it was 2785. Just think about that for a moment: Bobby Fischer’s peak rating is the average rating of ten players at the 2015 London Classic. That thought is so mind-blowing I’m going to have to lie down for a while to come to terms with it. Finally, we had our first result when Vachier-Lagrave versus Carlsen ended with a perpetual check. The players scooted through the opening fairly briskly until move 16, when Carlsen, playing Black had a 13-minute think before innovating with 16…Qc8. By move 20, White had used 49 minutes to Black’s 58. However, the position was a little lifeless: Carlsen didn’t think too long before allowing a line which would result in perpetual check. As London policemen like to say at minor street incidents, “nothing to see ‘ere, move along now, please, ladies and gentlemen!” 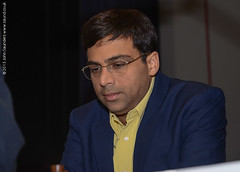 We move on to Anand-Adams. Over the years Mickey has had quite a tough time against the genial Indian world champion, and thoughts of Marshall Attacks against Vishy’s Ruy Lopez are floating into my mind. But not this time as Vishy pushed his c-pawn forward two squares on the first turn, as some of you may recall that Bronstein and Carlsen both did as a courteous gesture to the host nation in tournaments many decades apart. Nothing very startling occurred in the opening, with Vishy’s 12.Qd2 being new but not earth-shattering. Minor pieces were hoovered off and a repetition amongst queens and rooks ended hostilities.

Grischuk-Nakamura began with a Berlin Defence. Some of you may recall that Vishy Anand suggested to commentator Nigel Short after last year’s final round that this line should be renamed “the London”. I was all for it, bearing in mind that it was Vlad Kramnik’s championing of the line at his 2000 world championship match in London with Kasparov that really put the defence on the map.

On our map, that is, and not a German one. We could perhaps refine the name and call it the ‘London Wall’. There is such a structure, by the way, built by the Romans two thousand years ago, and that is more than can be said for the Berlin Wall, an unpopular edifice which only lasted a few decades before being pulled down. I submit, therefore, that our ancient city wall is a better metaphor for what is a highly resilient chess defence. 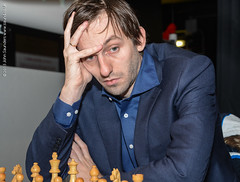 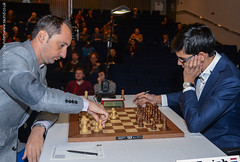 Which brings us to the game of the day, Topalov-Giri. Former FIDE world champion Veselin Topalov was making his debut at the London Classic and, with his addition to the list, the tournament can claim to have hosted all the current great names of the game. It’s hard to think of anyone who has provided more entertainment to chess spectators since Kasparov retired, whom he had the honour to play (and defeat) in the former world champion’s final game of classical chess. I must confess that the opening didn’t seem to promise a Topalov tour de force but, sure enough, it soon caught fire when Topalov sacrificed a central pawn to get his pieces firing. Anish Giri chose to give the pawn back. His position still looked a bit fishy but he had at least defused some of the tactical threats. At move 25, had Topalov been allowed to call over to the world champion and said “hey, Magnus, do you want to come and take over my position?”, one feels it would have been very bad news for Giri. It looked like a typical Carlsen torture chamber. But suddenly fortunes changed and Topalov looked ill at ease. In time trouble he walked into a glorious tactic and Anish blew him away. All credit to both players who played half a great game each (if you know what I mean).

1.d4 Nf6 2.c4 g6 3.g3 c6 4.Bg2 d5 5.Qa4 Is it a Catalan? A Grunfeld? Frankly, I haven’t a clue, but this hybrid system seems to have quite a following amongst the super-GMs. Before long you can bet the woodshifters down your local club will be playing it, too, though they won’t really know why they’re doing it. 5…Nfd7 Gelfand has played this so it must be good stuff (or, in the stilted language of the chess world, ‘principled’). 6.cxd5 Other super-GMs reaching this position have opted to drop the queen back to c2 or b3 rather than resolve the pawn situation in the centre. 6…Nb6 7.Qd1 cxd5

The final game to finish was Caruana-Aronian. Though long and hard-fought, it never quite tickled the fancy of the commentators, probably because it was more of a technical struggle. One for Ruy Lopez aficionados, perhaps: forgive me for passing over it in silence.

As well as the Classic itself, we have a very strong open tournament, and the final of the inaugural British Knock-Out Championship. The latter is being contested by English number two David Howell and the surprise qualifier for the final, English number eight Nick Pert, who knocked out Luke McShane on his way to the final. The first game of their six-game match ended in a draw in only 15 moves. So enough said about that for now. 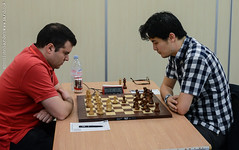 Round one of the open had a sprinkling of creditable results for underdogs as the sub-2200s confronted the GMs. Alex Lenderman, Sergey Grigoriants and Benjamin Bok were held to draws by Rhys Cumming (England), Daniel van Heirzeele (Belgium) and Stephen Moran (Ireland) respectively, so well done to the latter three. The big surprise, however, was veteran English amateur Roger de Coverly (who’s even older than me – yes, that old) beating GM Peter Wells. Roger has been around forever. I recall he was a member of the opposition team in what was only my second competitive game of chess when our schools met in 1967. These days he’s better known as the most prolific poster of comments on the English Chess Forum – 13,270 comments posted in something over seven years. That’s an average of about six published comments a day. Even I’m not that verbose, but it obviously hasn’t done his chess any harm. It was a very impressive win – a textbook example of how a sub-2200 player should play against a GM – so I’d advise you seek it out from the PGN download available on our website.

More photos take by me are available here: https://flic.kr/s/aHskn1h789

What is your favorite chess player? Share with us in the comments.

Here is a great chess clock!