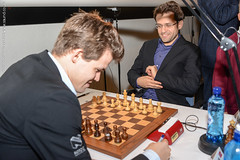 As usual we started with some children making moves for the grandmasters. This time the children in question had travelled all the way from Gloucestershire. That’s around 200 kilometres due west of London for those readers unfamiliar with our green and pleasant land, and our adherence to Imperial units of measurement. They brought with them some innovative opening ideas. The little boy from Slimbridge Primary School deputed to make Levon Aronian’s move against Magnus Carlsen unfurled 1.Nh3!? which was extremely welcome with us photographers as it made the players smile for the camera.

The clash of two of the leaders, Vachier-Lagrave and Giri, was bloodless and the first game to finish, around two hours into the round. It was a Berlin Defence and drawn in 33 moves. The main point of interest was the move 19…Nd4, which must have been computer analysis. It was a prepared improvement on the game Adams-Kramnik, played – no prizes for guessing where – yes, at the Classic last year. Thereafter the only piquant point was the presence of passed pawns on the same file (as if they had somehow overtaken one other). However, the resultant position was lifeless and a repetition duly followed. The Athenian oracle was typically withering: “I have gone on strike: I refuse to commentate on [MVL v Giri] as a point of principle.” A colleague in the press room thought that the players’ priority might have been watching the evenings’ Champions League matches. I just hope neither of them was a Manchester United supporter. 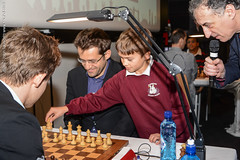 Aronian-Carlsen was drawn after around three hours’ play. It started life as an English Three Knights, quickly reaching a position which will also be familiar to c3 Sicilian and Caro-Kann players, with White having hanging pawns on c3 and d4. Those of us who have essayed the white side (the writer includes himself) may be familiar with the pattern whereby any advantage White has in the middlegame gradually erodes and turns to disadvantage as an endgame position develops. Gratifyingly, this doesn’t just happen to us hapless woodpushers, as Levon Aronian’s position also seemed to worsen between move 20 and 30. However, not so much that he was in any significant danger of losing. Soon what remained was a drawn rook and pawn endgame, and a truce was signed. Thus these two giants of the game go into the rest day with the identical score of five games, five draws. A little disappointing, to say the least.

The other three games proceeded beyond the time control at move 40 and had much of interest to the spectators. Mickey Adams’s Ruy Lopez was met by Nakamura’s Berlin Defence (boo!) to which Mickey replied 4.d3 (which I think of as the ‘Even More Boring Variation’ against the Berlin). The players exited the book but then Mickey must have had a sudden rush of blood to the head and played h2-h4, h4-h5 and h5-h6 in the space of four moves. On Twitter Nigel Short exclaimed “Whoa!” and awarded the original thrust 10.h4 a pair of exclamation marks (though he might have been kidding). Nakamura, probably awe-struck, sidestepped the pawn advance and played g7-g6 after the white pawn came to h6. There didn’t seem to be any accompanying onslaught from Adams’s other pieces and the pawn was left stranded on h6, waiting to be engulfed by Black’s army. This duly occurred and White was left a pawn down in an otherwise unremarkable middlegame.

So, once again, the English super-GM’s job was to defend a dodgy position, and this time he was a pawn down. But, to be fair, things weren’t quite as bad as they might have appeared and Mickey went into the line with his eyes at least partially open. Black’s queenside pawn structure with the trademark Berlin doubled c-pawns didn’t do Nakamura any favours when it came to trying to win with his extra pawn. Not for the first time in this tournament, stout defence trumped an apparent advantage, and Nakamura couldn’t make any impression on the Adams rearguard. Computers don’t find fault with Nakamura’s attempts to win so we are left to conclude that it was another success for solid defensive play. I’m going to suggest to our tournament director (you are reading this, aren’t you, Malcolm?) that we play the theme music to The Great Escape when Mickey next walks onto the stage to take his place at the board. I would nickname him ‘Houdini’ but that soubriquet has already been used for an analysis engine. Five draws from five games may not be so great if you’re a 2800+ rated world champion but it sounds a whole lot better when you are the  lowest rated competitor in the shark pool and have already styled yourself the underdog. Caruana-Grischuk was another Berlin with the even more boring 4.d3. However, Caruana improved on Mickey Adams’s treatment of the line by not launching a pawn down the board and seeing it disappear. He too underlined the same structural disadvantage of the Berlin pawn structure as he created a typical position where White has a virtual pawn advantage (four versus three on the kingside, while Black has four, but including two doubled pawns, on the queenside, with little prospect of undoubling them). This might not have been so damaging for Black were it not for the fact that he was, as always, so profligate with his thinking time. Caruana gradually improved his position to the point where he was winning but, unaccountably, under no particular time pressure, let a fairly obvious winning line go begging. 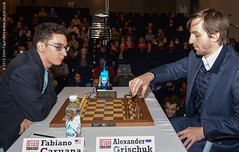 The final game of the round, and the one decisive encounter, was Anand-Topalov. The Bulgarian has now been marked out as the whipping boy of the tournament and he can of course expect no mercy. “It’s nothing personal,” as the Mafioso said in The Godfather, just before launching a murderous attack on Don Corleone, “just business.” First of all, Topalov deserves credit for playing 1…c5 on move one. OK, Veselin has committed the Berlin sin himself a few times in the past but not here, so far. But he committed a much worse win by going very passive and allowing Vishy to establish a good knight versus bad bishop endgame. The rest of the game resembled a typical Carlsen squeeze, except that it was Vishy playing the part of Torquemada. It wasn’t a flawless win, by any means, but highly educational for us spectators and inspirational for Vishy himself. For Topalov it would have been abject misery. He started the tournament as the Grand Chess Tour leader, but now he is the only player in the line-up with a negative score – and a gruesome minus three at that. You can’t help feeling for the guy. As Nigel Short remarked on Twitter the other day, “if you are in bad form at Wimbledon, you just get knocked out. If you’re in bad form at #LondonChess you can be humiliated day after day.” 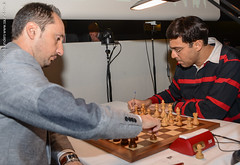 Wednesday is the rest day and the players will need it, particularly the unlucky Topalov. Let’s hope they come back breathing fire and positivity on Thursday.

The fifth game of the six-game match between David Howell and Nick Pert ended in a draw, so Nick Pert now has the unenviable task of beating Howell with Black if he is to take the match into overtime.

More of my photos from round five are available here: https://flic.kr/s/aHskpJM1JT