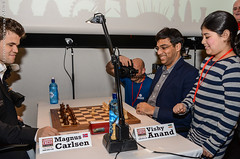 At the start of every round at the London Classic we always have at least one special guest on stage to make the first move for one or more of the super-GMs. Sometimes it’s a sponsor or a celebrity but more often than not it is one of the many children learning to play the game courtesy of the Chess in Schools and Communities charity. Children make great ‘honorary movers’ because you can never be quite sure what they are going to do! Today was a delightful example as Anum Sheikh, the self-confident little girl deputed to make Vishy Anand’s first move against Magnus Carlsen, not only plonked down the right move, 1.e4, but also helpfully pressed the 15th world champion’s clock for him. Never seen that done before: the CSC clearly teach them well. A lovely moment which dispelled the tension and was greeted with smiles all round. It obviously influenced the other players too, as that was the opening move chosen in all five games. Anum Sheikh is a smart girl: she’ll go far. John Saunders reports: 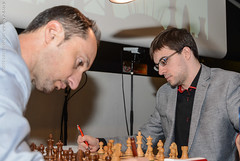 Round 3 featured just one decisive game, as Maxime Vachier-Lagrave of France defeated Veselin Topalov, who has thus lost the only two decisive games of the tournament so far. Scores: 1-2 Giri, Vachier-Lagrave 2/3, 3-9 Adams, Aronian, Anand, Carlsen, Caruana, Grischuk, Nakamura 1½, 10 Topalov ½. However, despite unpromising opening choices made on all five boards, it was an absorbing round of chess in which there might well have been more decisive results had all the chances offered been taken.

Following our quotations from the Athenian oracle quoted yesterday, we turn today to another favourite amongst oracular voices on Twitter. @GingerGM, or Simon Williams, as he’s better known, was unimpressed when he logged in to follow play in the third round: “I excitedly just tuned into #londonchess had a quick look at the positions, quickly turned off – #bloodyberlin”. We feel your pain, Simon. There were no fewer than three Berlins, plus another Ruy Lopez without 3…Nf6 and a Sicilian. He later added the comment: “In some ways I am happy that I am not a world-class chess player. Can keep playing interesting openings, without ever

learning the Berlin [smiley face].” Yes, it did look a bit dull to start with but it soon got very interesting. 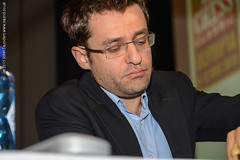 There was another bit of onstage amusement before battle started. Mickey Adams came on stage to find his name card placed alongside the black pieces for his coming battle against Levon Aronian. You can imagine the English number one’s bemusement, particularly as he had already had Black in rounds one and two! Was there perhaps some bizarre Grand Chess Tour rule that the wild card was assigned Black in every game? No – the board/table had been set up incorrectly. Oops. The tournament director did his Lord Sugar impression, pointing a dismissive finger at a rueful Chief Arbiter, and after this bit of comic by-play Mickey was put in charge of the white bits. That said, he didn’t look to be entirely in command of them in the early stages of the game, but he weathered the storm. OK, it wasn’t exactly Storm Desmond blowing from the Armenian side of the board (a reference to the weather system that’s been battering the northerly parts of our country these past few days), more of a brisk breeze. But Levon did seem to have much the more active position for a while. Mickey, however, is a cool head in a crisis and the white bishop’s nagging pressure against the a6-pawn made it hard for Black to exploit his positional edge. Vachier-Lagrave – Topalov was not a Berlin (hurrah!) but a line of the Sicilian, which my software of choice (Hiarcs Chess Explorer) dubs the Adams Attack (an ironic soubriquet, that, given Mickey’s grovellish position on the adjacent board). White’s opening didn’t look particularly incisive, but a long series of exchanges in the early middlegame brought about a position where material was level and White had a passed pawn on the queenside, with a queen and rook each. Surprisingly the passed pawn itself didn’t prove to be the decisive factor so much as Vachier-Lagrave’s deft manoeuvre to occupy the b-file with his queen and rook. Suddenly, from nowhere, the game was over. Topalov looked in poor form in this game, making a number of questionable decisions from move 21 onwards. Let’s hope he finds his best form soon as he’s such an entertaining player when he’s at the top of his game. Kudos, though, to Vachier-Lagrave, whose sudden switch of focus, from lumping the a-pawn downfield to threatening mate via open file, rank and diagonal, was highly impressive. 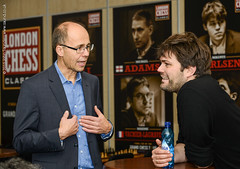 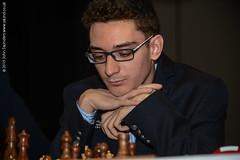