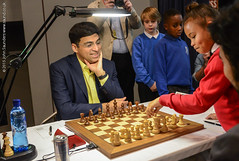 As some wit commented on Twitter, the Berlin Chess Classic is over and the London Chess Classic has started. Well, very nearly. In fact, one of the fourth round games did feature this unpopular but highly effective Ruy Lopez variation but it was a long and interesting struggle. There was plenty of absorbing chess but still only one decisive result, with Hikaru Nakamura beating Vishy Anand to move into a triple tie for first place with MVL and Anish Giri. The current scores: 1-3 Giri, Nakamura, Vachier-Lagrave 2½/4, 4-8 Adams, Aronian, Carlsen, Caruana, Grischuk 2, 9 Anand 1½, 10 Topalov 1.

Giri-Aronian was something of an academic exercise. Neither player seemed inclined to push very hard. The game began with an English Opening and pieces were exchanged off at regular intervals. A draw looked on the cards from an early stage and so it proved. & 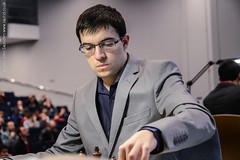 At the start of play, Julian Hodgson in the VIP room made it plain which game he intended to concentrate on: the Grischuk versus Vachier-Lagrave game featuring a Sicilian Najdorf. This is the sort of opening variation that watching grandmasters slaver over, whilst the rest of us can only marvel at the nuances that they argue over. It was indeed a pretty good game, with Grischuk walking the time tightrope as usual, after expending about an hour and a half over moves 13 to 15, but again the players spoilt matters by playing too well. Some apparently unbalanced positions occurred along the way but the players picked their way precisely through the complications, in Grischuk’s case with very little time to spare, and found all the right moves to maintain the equilibrium. Shortly after the time control they repeated positions and a draw was agreed. If you look at the Stockfish engine’s assessments of the position from Black’s move 26 to the end, you’ll find it was exactly 0.00 on every move. Positively uncanny.

Nakamura-Anand was a surprising game in many ways. The opening, a Catalan, wasn’t particularly sharp, though White built up pressure against Black’s d5-pawn. Anand chose to counter this by surrendering it for some positional counterplay. This was a reasonable plan but he followed it up unconvincingly, and Nakamura was able to consolidate his pawn plus, and bottle up Anand’s queen on the queenside into the bargain. Nakamura grasped his chance with alacrity and by the time they reached move 40 was about to increase his material when Black decided he’s seen enough and resigned. Quite a disappointing game for Anand and his many followers. With all three decisive games being lost by the forty-somethings in the line-up, pundits are shaking their heads and citing anno domini as a significant factor. I do hope they are wrong: come on, the old guys. 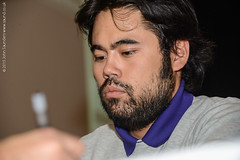 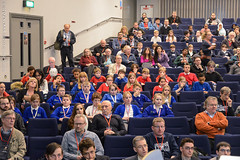 I’m glad I didn’t stay to the bitter end. Although ‘bitter’ was very much the operative word as I decamped to a pub. The London Classic is the focus for much chess activity in the London area, not all of which is organised by Malcolm Pein’s team. Just as there is an Edinburgh Festival, there is also an Edinburgh Fringe. So we can think of these unofficial chess events as part of the London Classic Fringe. I headed down to my home town of Kingston-upon-Thames (which is really just a suburb of London) to attend a simul given by GM Stuart Conquest at Kingston Chess Club. Stuart now lives in Gibraltar but of course he wanted to be in London for the Classic, and he was able to slot in a simul whilst in town. (If you’re interested, he scored a creditable +12, =2, -0 against a strong line-up including one former British Under-18 Champion and a FIDE Master, drawing with Alan Scrimgeour and Angus James.) This is just a small example of how the London Classic reinvigorates chess in the capital for its duration, with a plethora of visiting titled players available for chess functions. And I was able to watch Stu play his simul whilst following play at Olympia in the two long endgames via my smartphone. 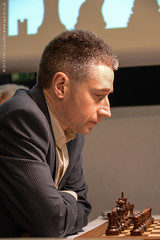 Meanwhile, back at Olympia… I hope everyone has had a look at that great little video of all the players giving one-word assessment of their rivals (and themselves). The last word went to Mickey Adams about himself – “underdog” – whilst two of his fellow competitors cited Kasparov’s famous homage to the great Briton: “spider”. Mickey is celebrated for his toughness and every British chess fan could be proud of their man as he held out for a draw against the world champion in what had seemed a forlorn cause. If I’d been asked for a one-word assessment of Mickey, I’d have opted for “Banks”, comparing the Adams rearguard action with that of the legendary England goalkeeper Gordon Banks and his wonder save against Pele in the 1970 FIFA World Cup. Thinking of a more chessy analogy, perhaps Mickey could wear a T-shirt with the inscription “I was tortured in the Carlsen Jailhouse – and survived!” That’s it, I’m all out of analogies, you’ll be relieved to hear. Mickey’s opening woes probably stemmed from the awkwardly-placed knight on a6 and the best he could do to survive was to give up the exchange for a pawn. However, with limited material left on the board, he had more than a glimmer of hope of survival. Eventually, on move, he manoeuvred his way into the position where  he has a vulnerable pawn on f7 but it is defended by the knight, which is defended by the bishop, which is defended by (and defends) the pawn on b6. You could call it a fortress, but perhaps ‘spider’s web’ would be more apt. After relocating his attacked bishop, Carlsen was left trying to find ways for his king and kingside pawns to find a way through the net. Having failed to do so, he tried giving up the bishop to get two kingside passed pawns but that too proved insufficient. A great save by the England number one.   The final game to finish was Topalov-Caruana. A Berlin Defence, with a sort of Giuoco Pianissimo flavour to it, the game exited the book on move 8. The Bulgarian, on ½/3, showed further signs of being out of sorts with some insipid play in the opening. Not only did he lose the initiative, he looked at a distinct disadvantage from about move 11 onwards. GM heads in the VIP room started to shake and a few people had already chalked up a 0-1 score in their mind as Caruana’s queenside attack started to unfold. But then things started to change: Caruana’s 21…c6? was a misjudgement and a deceptively simple sequence of moves by Topalov put White in the ascendant. However, a far-sighted, imaginative defence by Caruana enabled him to save the game. If Mickey is Gordon Banks, then Fabiano must be Brad Friedel, with maybe a dash of Dino Zoff. 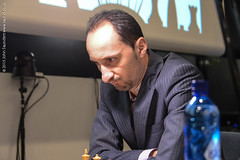 Those two wonderful saves by Adams and Caruana are the clue to why we are seeing so many draws at Olympia. Chess players at this exalted level are wonderful defenders, having learnt from computers that positions that used to be considered lost can actually be saved so long as you keep plugging away with precise moves and not allowing yourself to get too downhearted. Just as in football, when a single goal advantage often fails to a late equaliser, it ain’t over until the fat arbiter collects the scoresheets.

In the FIDE Open, Erstwhile leader Evgeny Postny was held by Benjamin Bok of the Netherlands, and there are now five players tied on 4½/5: Evgeny Postny (ISR), Alex Lenderman (USA), Eric Hansen (CAN), Tamas Fodor (HUN), Crg Krishna (IND). The latter, a 24-year-old IM rated 2367, has a TPR of 2705 at the moment, with a win against Vakhidov and a draw with GM Keith Arkell to his credit. 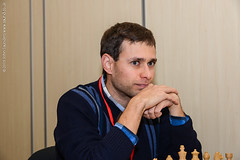 In the British Knock-Out Championship between David Howell and Nick Pert, there was another draw, so Nick Pert has two remaining games in which to level the scores, which stands at 2½-1½ in Howell’s favour.

Round 5 is scheduled for Tuesday 8 December 2015 at 16.00. (Note that Wednesday 9 December is a rest day in the Classic schedule.)

More of my photos from round four are available here: https://flic.kr/s/aHskqEmhQy

Are you agree John Saudners that the great defensive technique are the reason for all the draws? Please share with us your opinion  in the comment.

1 thought on “London chess classic; 4 round”