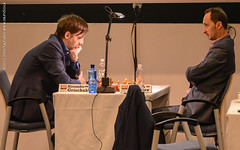 ALL DRAWS… … in today’s second round. That makes the scores Giri 1½/2; Grischuk, Vachier-Lagrave, Caruana, Anand, Adams, Aronian, Carlsen, Nakamura 1; Topalov ½. Most of the games were well contested, but elite, classical chess gravitates towards a drawn result and there’s no point getting hung up about it. One of the dangers of a stellar field is that the players can play excessively well. It happens in other sports, too. I’m sure we can think of major football finals which have ended 0-0 and gone to penalties, because the two sides have defended too well, or big cricket matches where neither side can bowl the other out. John Saunders reports: HOME THOUGHTS FROM ABROAD Before considering the games, there’s one thing different about this year’s Classic. We’re missing Nigel Short. England’s larger than life grandmaster is a bit poorly at the moment, having had to pull out of the British Knock-Out Championship (where his replacement, Nick Pert, has taken full advantage of the unexpected opportunity). We wish Nigel a swift recovery. We also miss his shafts of wit in the commentary room and elsewhere. For example, who could forget his ingenuity when borrowing Boris Becker’s walking stick to use as a pointer when giving an impromptu lecture at the display board in the VIP room a few years back? Not many people would have had the chutzpah to ask, but the famous tennis star, visiting the tournament after sustaining an injury to his leg, didn’t mind a bit. It gives you an insight into Nigel’s ingenious turn of mind, and leads you to think that anyone who makes such a request of a Wimbledon champion can be expected to have the creativity and confidence to make that amazing king walk (minus crutch) to checkmate Jan Timman all those years ago. It was Tilburg 1991 if you’re minded to look it up. 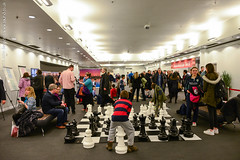 Nigel’s pining for us, too. He’s following progress back home in Greece and supplying some feedback via Twitter. His first missive was “Gutted at not being at #londonchess. Watching the demigods from my study.” I’ll interpolate some of Nigel’s other pithy Twitter comments into the summaries of games.

Giri – Adams was the first game to finish, around two hours into the session. “I wasn’t too happy – but then suddenly it was a draw” was Mickey Adams’ succinct post-game comment. The game opened with a Classical Nimzo-Indian (4.Qc2). After 16 moves, White had used less than five minutes while Black had already thought for three quarters of an hour. Black had a cramped position, with a hemmed-in light-squared bishop and a hole on b6. But then… nothing. White had a bit of a think (though he had only used 37 minutes by the time the game ended) and decided he couldn’t make progress. Anish Giri puts me in mind of the Hogwart’s motto: “draco dormiens nunquam titillandus,” or, in English, “never tickle a sleeping dragon.” He enjoys being provoked to violence, as in the round one game, but seems less inclined to initiate chessboard mayhem himself. 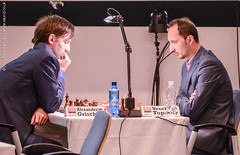 Topalov – Grischuk was a Berlin/London Defence. Nigel Short again: “When I see the Berlin, I almost become happy that I am no longer a top player.” I tend to agree with his scepticism, whilst recalling that yesterday’s Berlin game between Grischuk-Nakamura, though drawn, was pretty good value. 12…Bd7 was the first unfamiliar move. Later 18.b3 by Topalov looked a little strange and Grischuk took the initiative with Black. However, it always looked on the cards that the game would be left with pawns only on one side of the board and the game petered out to a draw. If the likes of Messrs Grischuk and Topalov cannot stir up a storm with the Berlin, it does rather support Nigel’s case. 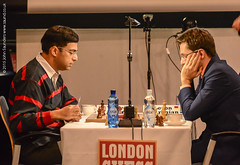 Aronian-Anand featured an offbeat line of the Nimzo – 1.d4 Nf6 2.c4 e6 3.Nf3 d5 4.Nc3 Bb4 5.Bd2!? According to my database, the first person to try this was Alekhine at a simul in Greenock in 1923 – and he lost. Well, serves him right for indulging in such pusillanimity. The bishop looks all wrong on such a tame square. Except for the fact that, when I looked through the game in question, Alekhine was all over his opponent like a cheap suit, and only lost because of a ridiculous blunder. So maybe it’s OK after all. Aronian was probably less interested in a 90-year-old game from a Scottish simul and more influenced by the fact that he himself had lost a game to it against Nakamura in Saint Louis last year. The game transposed to something resembling Nimzo-Indian orthodoxy. Grandmaster opinion in the VIP room indicated that White had an edge in the early middle game but that it evaporated quite quickly after the queens were exchanged. Once Black’s knight was established on e4 for the second time (on move 28), the repetition of moves was an odds-on bet. as English number one, Hugh Alexander, expressed a broadly similar opinion. “If God played God in the Benoni, I think White would win; at the lower levels, however, Black has excellent practical chances.” Those practical chances were certainly in evidence in this game, as White made a mess of the opening. 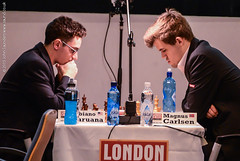 Carlsen – Caruana was another Berlin. Nigel was withering: “Can someone please wake me up if anything happens in the @MagnusCarlsen – @FabianoCaruana game?” including the players’ Twitter addresses to ensure they would become aware of his scorn. The players proceeded down a well-worn super-GM path to an innocuous-looking position on move 20 with a symmetrical pawn structure and a dwindling array of material on the board. Of course, you never know with Magnus: his speciality lies in finding an oasis in a positional desert. Once his passed pawn came to d6, you started to wonder. Could he be headed for one of his trademark long grinds? I did my own straw poll of the GMs in the VIP room. Around move 30, I asked John Nunn what he thought and he opined that White had an advantage. A move or two later I asked Chris Ward and he thought there was nothing significant for White. Nigel Short put it very well on Twitter: “I know the engines say equal, but I always get a bit nervous when my opponent has a passed pawn on the 6th.” Had the 140-character restriction not prevented a longer comment, I imagine he might have added, “especially when the opponent is Magnus Carlsen”. But the dangerous criminal passed pawn on d6 found itself securely locked up in the Caruana penitentiary and there was to be no spectacular Carlsen jailbreak. Instead, the American came up with a witty finish, giving up a rook to force perpetual check.

David Howell defeated Nick Pert in the second game of their six-game match so leads by 1½-½ in the battle for the British Knock-Out Championship and the £20,000 winner’s cheque. It came down to a tricky rook and pawn endgame which looked drawn for much of its course but turned round towards the end.

More of my photos from round two are available here: https://flic.kr/s/aHskqwzhAN